As we start a new year, I find myself so incredibly excited for what 2020 will bring and so grateful for my readers. Thank you for your messages of support and all the words of mine you’ve read throughout the year. I thought I’d give you a sneak peek at what’s in the works for me this year.

But FIRST … If you haven’t read it yet, A GLAZED FINISH released in November. People are saying it’s one of their favorites yet. 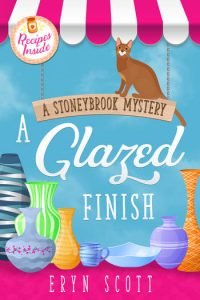 This type of mugging can be deadly …

The annual River Run is a fall favorite in Stoneybrook. Participants end the race with a commemorative mug from local potter, Josie Cobb. But when one of the mugs is shattered over Josie’s ex-husband’s head and he’s found dead along the riverside trail, the sheriff is sure the potter finally snapped.

To make things worse, the dead man had flowers and an engagement ring with him, only months after the ink dried on his divorce to Josie.

Hadley cannot believe the generous local artist would do such a thing. Before the authorities make a huge mistake, Hadley has to prove Josie’s innocence. This trail of clues is about to lead Hadley to uncover a big secret in her small town.

Here are some things you can look forward to from me in 2020! 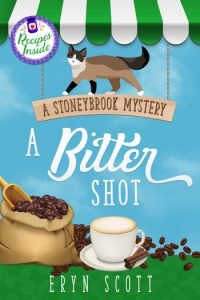 A BITTER SHOT, book 7 in the Stoneybrook mysteries will be coming this year!

In this installment of the Stoneybrook mysteries, Wendy’s coffee shop is the site of scandal and murder. But the clues at the scene are … odd to say the least.

Will Hadley, Paul, and the rest of the gang be able to find the killer before another body hits the grounds?

The end of the Pepper Brooks mysteries 🥰 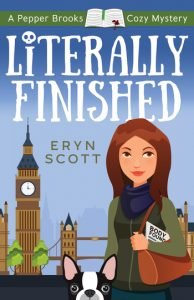 When Pepper and Alex get an invite to visit Professor Ferguson in London, they jump at the chance. They need a break from wedding planning. During a Charles Dickens walking tour through the city, the two become entangled in yet another murder investigation. Between the orphanage setting of the crime—and the fact that the victim was an ornery schoolmaster fitting of the pages of a Dickens novel—Pepper’s sure it’s a case of retaliation from the children.

But as the clues begin to unfold, she realizes this death may connect the two cities in Dickens’ most famous novel, and that this mystery may be deeper and darker than anyone could’ve imagined.

Literally Finished should be hitting shelves in the summer! I wish I could share it with you sooner, but I have some more research to do in London (🤗🤗🤗), so I have to wait until my trip there in the spring.

You guys! I’m SO excited to be able to finally announce this, but I’ve been working on this new series in secret for a while and I’m LOVING IT! Okay, let me set the scene for you…

We’re in a fictional town on the northern Oregon coast. It’s rocky, craggy, and downright dangerous in certain sections–especially next to the infamous Desperation Cliff. In the midst of the fog, crashing waves, and cawing gulls, you’ll find a cove tucked into the mountainous range running along the coastline. It’s a small oasis in the melee, this little town, and it’s called Pebble Cove. 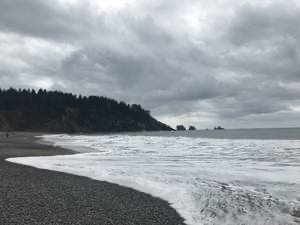 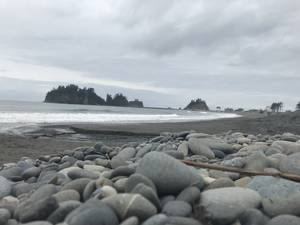 (These photos are of a beautiful Washington beach in La Push, but my time spent here definitely influenced the setting of Pebble Cove, so it’ll help you get a picture.)

Rosemary Woodmere used to spend summers at her grandmother’s Victorian beach house, but that was before… well, everything. Before the accident, the sickness, the fight, the silence. Fifteen years later, Rosemary has grown up and has inherited the house she hasn’t set foot in for over a decade, left to her by a woman she hasn’t spoken to for almost as long.

Needless to say, the girl already has a lot on her mind. So when she learns that her grandmother was murdered, Rosemary finds herself enveloped in a mystery she could’ve never predicted.

The first four Pebble Cove Teahouse Mysteries will be out in 2020!

You can sign up for my newsletter (the VIP Readers tab above) to get notifications of when they’ll release! 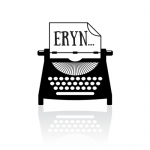