And now for something completely different... - ERYN SCOTT

In my latest book, Settling Up, the main character, Lauren  loves to make lists. I do, too. Yep, percentage weighted, pretty-darn-detailed lists have helped me make some of my life-decisions (from the trivial to the quite important).

Now, while I don’t have a Perfect Guy List like Lauren (deciding to marry my husband was the easiest decision I’ve ever made), I do have a list that’s somewhat famous among my family and friends. Anyway, I thought I’d share it with you, readers. We could all use another list to carry around with us in our heads, right?

Those of you who know me, understand my inability to deal with scary things. Maybe it’s a sign that I was always meant to be a writer, but I’ve always possessed what some would call an overactive imagination. And while this wonderful imagination can help me picture scenes happening in my books, it  also “helps” me picture horrific what-ifs in all-too-much detail. 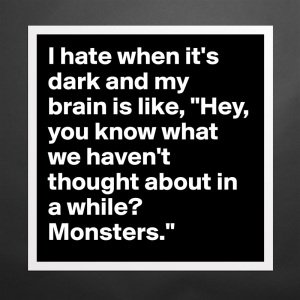 Because my brain already seems predisposed to this kind of thinking, I try to do as little as I can to fuel these scary images by avoiding all things horror: books, movies, pictures, etc.

To help me with this, I’ve cultivated (after years of hard work) a list of things to avoid. If any of these shows up in a movie, book, or otherwise, I stay far far away.

WARNING: if you are easily scared, you probably won’t want to read most of this list. Even writing it is giving me the willies.

Anyway, that’s where it stands right now. What would you have on your list? Or what other lists do you use to help you deal?